Ukrainian airplane with over 170 aboard crashes in Iran; no survivors

TEHRAN (defapress) – A Boeing 737 belonging to Ukraine International Airlines has crashed due to technical problems after take-off from Iran's Imam Khomeini airport with at least 170 passengers and crew, mostly Iranians, on board.
News ID: 79832 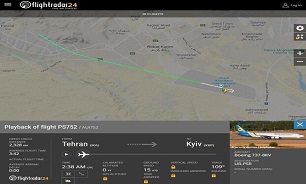 The airplane took off from Tehran Imam Khomeini International Airport and was headed to Ukrainian capital city Kyiv.

According to the spokesperson of Iran’s aviation organization, the exact number of people on board were 167 passengers and nine crew members, including 70 men, 81 women, and 15 children.

Regrettably, no one on board survived the crash, said Pirhossein Koulivand, head of Iran's Emergency Medical Services, after search and rescue units were dispatched to the crash site.

He added that 147 passengers were Iranians and 32 were of foreign nationals.

CEO of Imam Khomeini International Airport said the details of the crash are being investigated.

Meanwhile, the head of the Ministry of Road communications and information center said the plane crashed after its engine caught fire.