US President Trump has come to a deadlock

TEHRAN (defapress) – Major General Yahya Rahim Safavi, a top military aide to the Leader of the Islamic Revolution said that US President Doald Trump has come to a deadlock in the international arena.
News ID: 79846 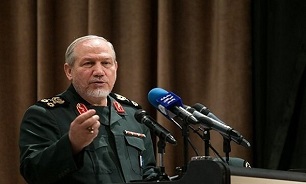 He made the above remarks in a local ceremony on Thu. among combatants of the eight years of Sacred defense (Iraqi imposed war against Iran in 1980-1988) in Tabriz and added, “in the early hours of assassination of IRGC Quds Force Commander Gen. Qasem Soleimani and Second-in-Command of Iraq’s Popular Mobilization Units (PMU) Abu Mahdi al-Muhandis in Iraq, people of Tabriz first rushed to the street for the funeral procession of the martyred commanders.”

Elsewhere in his remarks, Safavi shed light on the security-political situation in West Asia, Iran and US and added, “US assassination of IRGC Quds Force Commander Gen. Qasem Soleimani and Second-in-Command of Iraqi PMU Abu Mahdi al-Muhandis in Iraq showed that US security-political strategy has failed in the West Asia in the face  of resistance front.”

The policy of sanctions and pressures has failed against the determined will of Iranian people, he said, adding, “by the grace of God, Iran will give harsh response to US heinous act in assassination of martyred commanders and basic cultural, security and political changes will be shaped in the West Asia and Middle East region,” Major General Safavi highlighted.