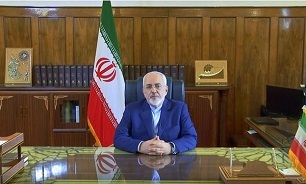 Zarif and his Danish counterpart Jeppe Kofod held talks on the sidelines of the ongoing 4th 'RAISINA Dialogue 2020' in New Delhi, on Wednesday.

The two sides conferred on current tensions in the Persian Gulf region and role of the US and its allies in sowing the insecurities in this region, the JCPOA, Europe lack of commitment to Iran nuclear deal and etc.

Earlier on Wednesday, Zarif met and talked with his Estonian counterpart Urmas Reinsalu in India as well as Afghan National Security Adviser Hamdollah Moheb and Minister of State at the German Federal Foreign Office Niels Annen.

The diplomats are taking part in the 2020 Raisina Dialogue which is underway in New Delhi.

The three-day event kicked off on Tuesday in New Delhi, with over 180 delegates from 105 countries in attendance. The 2020 edition’s theme has been defined as ‘21@20: Navigating the Alpha Century’.