TEHRAN (defapress) - India is now capable of making Pakistan “bite the dust” in less than 10 days in any new war with its arch-rival, Prime Minister Narendra Modi said.
News ID: 80048 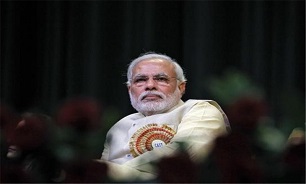 The nuclear-armed neighbors have fought three wars and last February came close to a fourth with tit-for-tat airstrikes sparked by an attack on Indian troops in Kashmir.

Modi is under pressure after weeks of ongoing protests against a new citizenship law, a slowing economy and the prospect of losing the latest in a string of state elections in New Delhi next month.

“Pakistan has already lost three wars. Our armed forces will not take more than 7-10 days to make Pakistan bite the dust, “Modi said in a speech to military personnel on Tuesday, AFP reported.

His comments follow last year’s incident when an Indian fighter jet was shot down - and the pilot captured - by Islamabad after a rare aerial engagement.

Wearing a maroon National Cadet Corps baseball cap at the event in the capital, Modi said India’s new prowess was thanks to what he called “youthful thinking”.

He said that Indian strikes against what New Delhi said were militants in Pakistan-administered Kashmir and inside Pakistan proper in 2016 and last year were evidence of this.

“This is ‘youthful thinking’. We carry out surgical strikes and take on terrorists in their homes," Modi said.

Modi said that Pakistan continues to wage a “proxy war” against India by backing militants in Indian-administered Kashmir where tens of thousands of people have died in recent decades.

Kashmir has been divided between India and Pakistan since Independence from Britain in 1947. In August Modi’s government stripped Indian Kashmir of its partial autonomy.