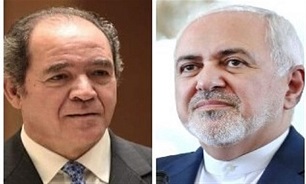 During a telephone conversation, Zarif and Boukadoum exchanged views about a range of issues, including the latest developments surrounding the US government’s plan and described it as “cruel”.

The two diplomats stressed the need for the Muslim world to take a firm stance against this conspiracy and in support of the rights of the Palestinian people.

Last week, US President Donald Trump unveiled his long-delayed Middle East plan, a proposal Palestinian leaders called a “conspiracy” that “will not pass”.