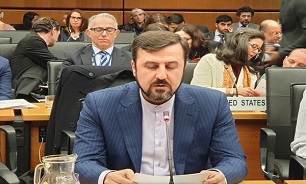 He lashed out at the misleading viewpoints on Iran’s Bushehr Nuclear Power Plant and emphasized, “problem arises when technical issues are politicized.”

He made the remarks on Mon. in IAEA’s Board of Governors Meeting and added, “the responsibility of nuclear safety is borne by the member state. Also, IAEA has a pivotal role in coordinating international efforts and presenting its specialty and experience as well as offering consultation for promoting and strengthening nuclear safety in the international level.”

As a government receiving technical assistance from the International Atomic Energy Agency (IAEA), the Islamic Republic of Iran recognized the significance of the assistance provided by the Agency to the member states in strengthening their national nuclear safety infrastructures and expresses its thanks in this regard, Gharibabadi stressed.

In this line, developing human resources and strengthening the capacities should be considered as a key point in safety, productivity, efficiency and stability of any nuclear program, he said, adding, “such assistance should not be subject to any restrictions including access of all to information and necessary resources for safe performance and operation of nuclear facilities.”

He then expounded on the safety situation of Bushehr Power Plant and added, “Bushehr Power Plant is the first nuclear plant in the country that was built by one of the most leading companies in the world; i.e. Russia’s Atom STORY Export.”

“The safest pressurized reactors, which is unique of its kind, are used in this power plant," he added.

Elsewhere in his remarks, Gharibabadi pointed out that the cooperation between IAEA and Iran is an ongoing process and the Agency is going to carry out a follow-up mission in Nov. 2020 to evaluate the implementation of the recommendations provided by the Agency.

This issue indicates another level of Iran’s utmost transparency and commitment to ensure the safety of its nuclear power plant, he emphasized.