Baghdad’s negative response to Washington, relations with Iran to continue

TEHRAN (defapress) – The Iraqi Prime Minister has recently revealed the heavy pressure from Washington against Baghdad to cut ties with Iran and responded that Iraq’s relations with Iran will remain strong.
News ID: 80466 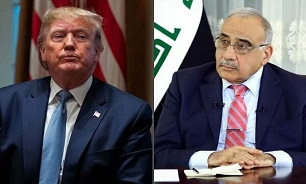 The Iraqi Prime Minister Adil Abdul-Mahdi has recently revealed a series of US sabotage and repeated interference in Iraq’s internal affairs.

The Iraqi Prime Minister noted, “The United States is seeking to sever Iraq's relations with Iran by putting pressure on Baghdad. However, geopolitical logic dictates that we use the capabilities of our neighbors to serve our national interests and security.” These remarks have a clear message to Washington regarding the strengthening of relations between Iran and Iraq.

As an example, we can refer to US pressure on Baghdad government after Washington’s withdrawal from the Nuclear Deal. At that time, US officials resorted to any means of forcing Baghdad to comply with Washington's sanctions against Tehran, but the Abdul-Mahdi’s government did not surrender to US pressure and explicitly stated that Baghdad was not part of the anti-Iranian sanctions.

Another message that the Iraqi Prime Minister conveyed to the US is the fight against terrorism. He recently appreciated the assistance of the Iranian nation and government in the fight against ISIL in Iraq. These remarks have a significant message to Washington which always claims that Iran supports terrorism.

US efforts to put pressure on Iraqi Officials with the aim of cutting Iran-Iraq relations have been futile so far. The Iraqi government is not affected by these moves and maintains that the relations of the two countries must further be improved.

This means that US massive investment in Iraq, especially since Donald Trump took office, aimed at severing Baghdad's ties with Tehran and consequently, reducing the Islamic Republic of Iran's influence in Iraq has completely failed. Obviously, Americans have realized that they are more isolated in Iraq than before.

The countdown has begun for the withdrawal of US terrorist forces from Iraq. US authorities are increasingly concerned about the growing ties between Tehran and Baghdad, as contrary to their claims they are well aware that the Islamic Republic is at the forefront of fighting against terrorism in the region.