Solidarity Strengthened in Resistance Pivot after Assassination of General Soleimani 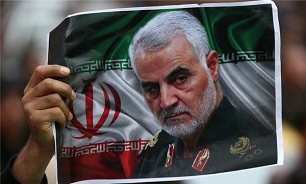 “The US always attempts to target the commanders who try to free their country but it did not benefit from the crime against General Soleimani and al-Muhandis and the assassination further united the combat in the resistance front’s battlefields,” member of Yemen’s Ansarullah Political Council Mohammad al-Bakhiti told the Arabic-language al-Mayadeen news channel on Tuesday.

He added that Iran’s retaliatory measure by attacking the US Ein al-Assad base in Iraq changed the rules of conflict between the resistance front and Washington.

Meantime, member of the political bureau of Asa'ib Ahl al-Haq group in Iraq Saad al-Saadi told al-Mayadeen that the resistance front has grown more powerful and prepared to confront the US plots after azsassination of the two leaders.

Also, senior member of the Popular Front for the Liberation of Palestine Maher al-Taher said that General Soleimani has turned into a role model in the world and his assassination backfired on the US.

“The aggression could not attain its goals and now we witness serious demands for the withdrawal of the US forces from Iraq, and his assassination increased solidarity in the resistance front,” he added.

Lieutenant General Soleimani and Abu Muhandis were assassinated in a US drone strike on Baghdad International Airport in Iraq on January 3.