TEHRAN (defapress) – Iran’s Foreign Ministry spokesperson said Washington’s ploy to again become a participant of the 2015 Iran nuclear deal after its unilateral withdrawal from the agreement is a nonstarter that runs counter to the international law.
News ID: 81001 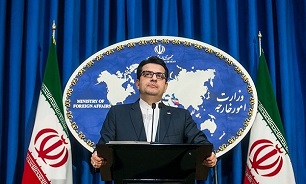 Speaking at a video press conference on Monday, Seyed Abbas Mousavi deplored the US’ push for extending a UN arms embargo against Iran under a plan to rejoin the 2015 nuclear deal, known as the Joint Comprehensive Plan of Action (JCPOA), saying such attempts are in contravention of the international law and the world is unlikely to approve the US plan.

“With its illegal withdrawal from the JCPOA, the US has sought to destroy all political, economic and security achievements (of the deal),” the spokesman said.

“The US has violated the (UNSC) Resolution 2231 and is no longer a party to the JCPOA. We are in contact with the other JCPOA members and are confident that they (Americans) will not succeed,” Mousavi added.

The spokesperson also said that Iran will be prepared to give an “appropriate and decisive” response to the attempts at referring the JCPOA to the UN Security Council and triggering the so-called snapback provisions of the nuclear deal.