TEHRAN (defapres) – The US Departments of State and Energy should commit to regular briefings to relevant committees in Congress on talks about nuclear power cooperation with Saudi Arabia, a congressional watchdog said in a report.
News ID: 81015 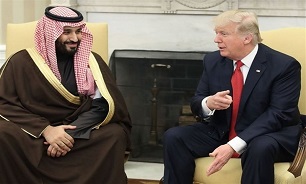 The Government Accountability Office, or GAO, report said Congress should consider amending the 1954 Atomic Energy Act, or AEA, to require the briefings for the House Committee on Foreign Affairs and the Senate Committee on Foreign Relations about negotiations on nuclear power-sharing, according to Reuters.

Lawmakers concerned about nonproliferation issues associated with nuclear power development had complained they were being kept in the dark about Trump administration talks with Saudi Arabia, many of which were led by former Energy Secretary Rick Perry.

Riyadh could announce a tender this year for two nuclear power reactors, its first commercial ones. Russia, China, South Korea and France have also been in talks about building reactors there.

The State Department is required by the AEA to keep Congress “fully and currently informed” about the talks. But the GAO found it was “unclear” whether the department did so. “Congressional staff provided us with examples of having to find information on the negotiations from other sources, such as press articles,” the GAO said.

Some US lawmakers want the United States to insist that Saudi Arabia agree to a so-called gold standard that restricts enrichment and reprocessing, potential pathways to making fissile material for nuclear weapons. The United States struck such an agreement with the United Arab Emirates in 2009. If Saudi Arabia develops nuclear power without the gold standard, the UAE would likely seek to be released from its agreement.

The GAO said Congress should consider whether to amend the AEA to require briefings, perhaps on a quarterly basis, and to specify expectations for the content of the briefings. Senators Robert Menendez, a Democrat, and Marco Rubio, a Republican, had asked the GAO last year to review US agency negotiations with Saudi Arabia on nuclear power, partially because they were concerned the Energy Department, not the State Department took the lead.

The senators said they would explore legislative changes recommended by the GAO. “Congress must reassert its critical role in reviewing nuclear cooperation agreements to ensure these agreements do not pose an unnecessary risk to the United States,” they said.