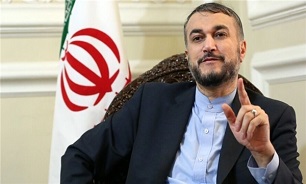 “The Zionists will have no place in the future of the region. The entire territory of #Palestine belongs to the Palestinians,” Hossein Amir-Abdollahian tweeted on Friday.

“No doubt, the #Resistance Front WILL TERMINATE the existence of the fake Israeli regime. With the help of Almighty God, we will soon pray in #Quds,” he added.

The tweet came on the occasion of the 72nd anniversary of the Nakba Day (the Day of Catastrophe). The Nakba Day is marked annually on May 15. It refers to the forcible expulsion of some 700,000 Palestinians from their lands following the creation of Israel in 1948 and their scattering across refugee camps in the West Bank, Gaza, and neighboring countries.