TEHRAN (defapress) – Iran’s ambassador to the United Nations strongly condemned a recent report by the UN claiming that missiles used to attack Saudi Arabia have been “of Iranian origin”, saying it has been made under political pressure from the US.
News ID: 81309 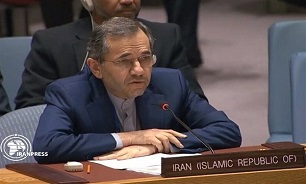 - ‘Iranian origin’ of arms is a fallacy.

Seems the US—with its history of Iran-bashing—sits in the driver’s seat to shape UN ‘assessments’,” Majid Takht Ravanchi tweeted on Saturday.

UN Secretary-General Antonio Guterres told the Security Council in a report seen by Reuters on Thursday that cruise missiles used in several attacks on oil facilities and an international airport in Saudi Arabia in November 2019 and February 2020 had been of “Iranian origin”.

He also said the “items may have been transferred in a manner inconsistent” with Security Council Resolution 2231, which enshrines the international nuclear deal – officially known as the Joint Comprehensive Plan of Action (JCPOA) – signed between Iran and world powers in 2015.

Guterres said in his report that the United Nations had examined the debris of weapons used in the attacks on an oil facility in Afif in May, the Abha international airport in June and August, and the Aramco oil facilities in Khurais and Abqaiq in September.

Iran’s Foreign Ministry in a statement also reacted to the report, saying that “Iran denies allegations by the UN Secretariat that appear to have been made under political pressure from the US and Saudi regimes”.

“Interestingly, the ... report comes at a time when the United States is working to draft a dangerous resolution to extend an arms embargo against Iran,” the statement said.