IRGC to Get Surprising Systems Soon

TEHRAN (defapress) – The commander of the Islamic Revolution Guards Corps said foreign attempts to extend an arms embargo on Iran have no impact on the country’s defense power, adding that surprising systems will be brought into operation in the country in the near future.
News ID: 81394 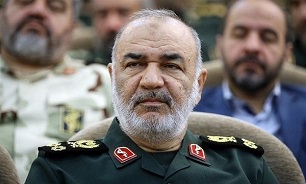 Speaking to reporters on the sidelines of a Saturday ceremony held to unveil new homegrown military equipment, Major General Hossein Salami said the IRGC has not relied on foreigners to manufacture any weapon.

“In the near future, we’ll witness the coming into operation of surprising systems,” the commander said, stressing that the foreign attempts to extend the UN arms embargo on Iran would not affect the country’s defense power at all.

While Iran is faced with an international arms embargo and the threats posed by the US and its allies, local scientists have taken the opportunity to fulfill the country’s defense needs with domestic capabilities, the general said.

Last week, the top commander highlighted the high level of Iran’s defense preparedness, saying that this has forced the enemies not to think of military options any longer.