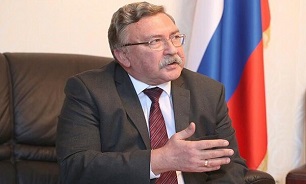 Russia's Permanent Representative to International Organizations in Vienna Mikhail Ulyanov in a tweet on Saturday wrote, "#Iran requested the Joint Commission of #JCPOA to address Tehran’s concerns regarding implementation of the deal by France, Germany and UK through Dispute Resolution Mechanism. This is the third time when JCPOA participants try to launch DRM which lacks clear and agreed procedure."

Zarif sent a letter to EU Foreign Policy Chief to denounce the EU3’s non-compliance with JCPOA after the three European states drafted an anti-Iranian resolution at the IAEA Board of Governors.

“Following the irresponsible and illegal measure by the three European states (Germany, the UK, and France) to initiate a draft resolution at the International Atomic Energy Agency Board of Governors and also the continuation of non-compliance with the international commitments under the JCPOA and the resolutions passed by the (JCPOA) Joint Commission, the Minister of Foreign Affairs of the Islamic Republic of Iran yesterday sent a letter to Mr. Borrell, the European Union Foreign Policy Chief and the JCPOA coordinator, and once again referred the cases of the European countries’ non-compliance according to Article 36 of the JCPOA to the Joint Commission for settlement,” Spokesperson for the Ministry of Foreign Affairs of the Islamic Republic of Iran Seyyed Abbas Mousavi said on Friday.