TEHRAN (defapress) – Iranian President Hassan Rouhani reaffirmed his administration’s readiness to work in close cooperation with the Parliament to contribute to the country’s progress and thwart hostile plots.
News ID: 81522 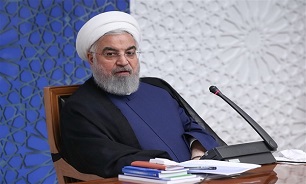 Addressing a Sunday session of the cabinet of ministers, Rouhani lauded Leader of the Islamic Revolution Ayatollah Seyed Ali Khamenei’s recommendation for synergy among the branches of power in Iran.

He said the administration is prepared for cooperation, constructive interaction and understanding with the new Parliament in order to help the country’s progress and development and combat the evil plots hatched by the enemies.

In an address to the first session of the new Parliament on May 27, Rouhani said his cabinet will cooperate with the newly-elected legislature on the basis of the Constitution.

“We hold the Parliament and every single MP accountable before the entire Iranian nation from the viewpoint of the Constitution,” he said.

“I hope that we could work in cooperation in this regard during the remaining year of this administration and the first year of the Parliament,” Rouhani added.