IRGC Chief vows revenge on US for Lt. Gen. Soleimani 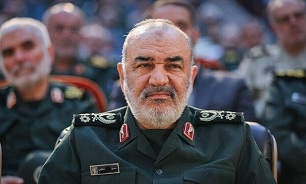 On the anniversary of Hezbollah’s victory over the Zionist Regime in the 33-day war and the day of the Islamic Resistance, Salami noted that with the Martyrdom of Lt. General Soleimani, the enemies created a permanent source of danger and revenge for themselves, and this revenge will be taken sooner or later.

He went on to say that the Martyrdom of Lt. General Soleimani gave a new life to Islamic countries and brought eternal glory to the Islamic Revolution, the Iranian nation, and the IRGC.

According to Salami, IRGC Quds Force created power in the fight against the enemies in different fields.

He further noted that the enemies sought to change the balance of power in the Islamic countries and form their own governments, however, they eventually failed and their desperate efforts came to nothing.

Iran’s former IRGC Quds Force Commander Lt. Gen. Qassem Soleimani and his comrades were assassinated in Baghdad International Airport on Jan. 3, 2020 at the behest of the US President Donald Trump.