TEHRAN (defapress) – Iranian Foreign Ministry Spokesman Saeed Khatibzadeh said that the 'snapback mechanism' is a 'fake' term used by the US as it is not mentioned in the UN Security Council Resolution 2231.
News ID: 81858 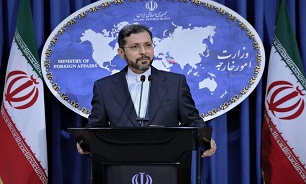 He referred to the forthcoming visit of the director-general of the International Atomic Energy Agency to Tehran saying that the two sides are to resolve their mutual issues during this visit.

He added that after the endorsement of the JCPOA, Iran and the IAEA have experienced a high level of cooperation and Iran has provided the best access to its sites and facilities.

The spox informed that during his visit, Grossi is to meet and hold talks with FM Zarif as well as AEOI Head Ali Akbar Salehi.

He also addressed Iranian FM Zarif's recent trip to Lebanon. "Mr. Zarif paid a visit to Lebanon, during which he met with Lebanese officials and announced Iran's solidarity and cooperation with the Lebanese government and people. Foreign Minister Zarif also had contacts with Bashar al-Assad about the Astana process."

US efforts in the UN Security Council against Iran

About the rejection of the US anti-Iranian resolution at the UNSC, he said: "We saw a historic meeting with just one positive vote."

"The US did it best to reopen the case at the UNSC but FM Zarif submitted a letter to the body before the new proposal of the US."

"Iran-Venezuela relations are based on mutual interests of the two countries and have no relations with other countries."

He named the recent US' seizure of oil tankers as piracy, reiterating that the tankers and the cargoes were not Iranian.

About Iran-Iraq relations, he said "The relations between the two countries are of high significance and we are always looking for strategic relations with our neighbors under a specific framework."

He added that the Iranian foreign ministry is working on the development of strategic ties with Iraq.

Khatibzade, elsewhere, named the so-called peace agreement between the Tel Aviv regime and the UAE as a strategic mistake of the Emirates, hoping that the country will soon compensate its bad decision.

He added that the Islamic Republic of Iran will give a response to any threats made by the Zionists against the regional peace and security.