TEHRAN (defapress)- President Donald Trump was struggling to retain support of active US service members, according to polls, even before last week’s bombshell report that the commander-in-chief referred to fallen and captured US service members as “losers” and “suckers”. But some veterans and military family members remain conflicted.
News ID: 81975 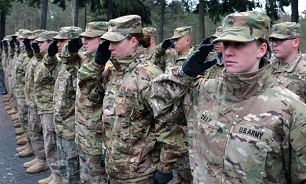 The Atlantic magazine’s story – in which four sources close to Trump said he cancelled a visit to pay respects at an American military cemetery outside Paris in 2018 because he thought the dead soldiers were “losers” and “suckers” and did not want the rain to mess up his hair – prompted an outpouring of condemnation, and comes less than two months before the November 3 election, The Guardian reported.

Several former Trump administration officials confirmed the report. Trump and the White House have denied it, with the president insisting, “There is nobody feels more strongly about our soldiers, our wounded warriors, our soldiers that died in war than I do.”

Polls in 2016 showed active service members preferred Trump to Hilary Clinton by a large margin, but polling from late July and early August conducted by the Military Times showed the continued steady drop in opinions of the commander-in-chief since he was elected, with almost 50% of respondents reporting an unfavorable view.

“I recommend all veterans to use their Military pics as a profile pic to let Trump know how many people he has offended by calling fallen soldiers losers and suckers. #NewProfilePics,” army veteran David Weissman, who describes himself as an “apologetic” former Trump supporter, wrote on Twitter last week, in a post that went viral.

Thomas Richardson, a retired member of the Army’s 82nd airborne, told the Associated Press that he was rankled by the reports.

“Usually, you don’t choose those kinds of missions. You agree to serve and you agree to go where your assignment is,” he said.

An active-service member stationed at the United States Military Academy at West Point military academy told the Guardian on Monday that the president’s reported comments were not necessarily surprising.

“I wouldn’t put it past him,” they said, adding, “But you don’t get to pick your commander in chief, and I take what he says with a grain of salt.”

The service member added, “Whatever political leaders say, we don’t put much store in it. We’re apolitical. We know they’re going to change out in four or eight years. Yes, they are in charge of us, but our other leaders are the ones who do the groundwork so we put our faith in them.”

However, some others have expressed skepticism at the report, with some veterans and military families divided.

“If you twist his words or just take one thing out of context, you’ll always find a way to hate him,” Katie Constandse, 37, who is married to a soldier stationed at Fort Bragg, told the Associated Press. “He’s a human being. He takes a lot of stuff. I don’t see how he has survived for almost four years – the constant barrage of anger toward him,” she added.

“We don’t need someone who is warm and cuddly,” she said.

A Pew Research poll from 2019 showed that veterans remained largely supportive of Trump’s leadership of the nation’s armed forces – which came after the death of Republican senator and Vietnam war hero John McCain, who Trump had criticized for being captured.

Jon Soltz, chairman of VoteVets, a progressive, anti-Trump veterans organization that says it represents 700,000 veterans and their families, tweeted last week, “I wish there was more outrage about Trump lying about the dignified transfer of the fallen for political reasons, because as a veteran it really disgusts me.”

The Military Times poll based on 1,018 active-duty troops surveyed in late July and early August found that nearly half of respondents (49.9%) had an unfavorable view of the president, compared to about 38% who had a favorable view. The poll found that 41% said they would vote for Trump’s Democratic presidential rival Joe Biden, if the election was held that day, while 37% said they plan to vote to re-elect Trump.

According to the poll, Trump has struggled to regain support among active service members, despite efforts to solidify his bond with the military that included delivering the graduation speech to cadets at West Point in June and talking-up a “colossal” $2tln rebuilding of US military might.

Trump’s West Point address came weeks after he ordered the area around the White House cleared demonstrators using teargas and other chemical irritants so that he and Defense Secretary Mark Esper, and the Chairman of the Joint Chiefs of Staff Gen Mark Milley could walk across Lafayette Square.

“What we have here is an effort to use the military to partisan advantage to the point of potentially putting troops in the streets to confront protesters [and] to present himself as the law and order president,” said Risa Brooks, professor of political science at Marquette University, told the Guardian at the time.

While Esper later claimed he had no knowledge of the plan, Trump’s threat to use the Insurrection Act to deploy troops on US streets received strong push-back from former military commanders. James Mattis, the Marine general who resigned as secretary of defense in 2018, voiced his opposition to Trump’s leadership.

“Donald Trump is the first president in my lifetime who does not try to unite the American people – does not even pretend to try. Instead, he tries to divide us,” Mattis wrote in a statement published by the Atlantic.

Trump has a long history of disparaging veterans, however. In 1999, while toying with a run for president as the Reform Party candidate, he attacked McCain.

“Does being captured make you a hero? I don’t know. I’m not sure,” Trump said in the interview with CBS. Later, in 2015, he said the senator was “not a war hero” and declared, “I like people who weren’t captured”.

He also reportedly called his top generals “losers” and “a bunch of dopes and babies” during a 2017 meeting at the Pentagon, according to the authors of A Very Stable Genius.

But Trump also, who avoided military service by citing a bone spur in his foot, appears to hold conflicting views.

In 2015, he told The Washington Post he felt “always felt somewhat guilty” about not serving in the military. In what he described as t an effort to make up for his guilt, Trump said he “spent a fortune” – reportedly $1mln – to build a Vietnam memorial in his hometown.

“I was a very strong opponent of the Vietnam War,” Trump said at the memorial’s dedication, adding, “but I also recognized that the people who went to fight were great Americans.”

He has also said his time in military school helped him to learn “a lot about discipline, and about channeling my aggression into achievement”.