Moscow Says Anti-Russian Campaign Not about Navalny's Health but Sanctions

TEHRAN (defapress) – The major goal of the anti-Russian campaign linked to Russian blogger Alexei Navalny’s case is to step up sanctions rather than care about his health, the Russian Foreign Ministry said in a statement on Wednesday.
News ID: 81987 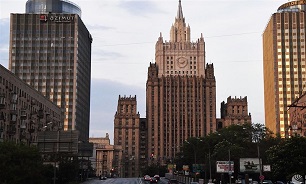 "Amid the German authorities’ unconstructive approach, unfounded attacks against Russia continue," the ministry stated. "A massive misinformation campaign has been launched that clearly shows that its initiators see the key task not in taking care about Navalny’s health and establishing the real reasons for his hospitalization, but in mobilizing the sanctions sentiment."

It added that Russia had been demanding that Germany provide data on Navalny’s medical examination, including on the results of biochemical tests in accordance with the August 27 official request by the Russian Prosecutor General’s Office.

"Despite all our requests, Berlin did not consider it possible to react swiftly and constructively," it stressed.

"The lack of the above mentioned information does not allow Russian law enforcement bodies to use all necessary procedural mechanisms for establishing the circumstances of the incident. Meanwhile, the frenzy around this case is only growing," the statement said, TASS reported.

Russian doctors are offering to establish a close dialogue with their German colleagues to discuss the Russian and German data on Navalny’s condition, but "unfortunately, the German side has been stonewalling this process," according to the ministry.

Navalny felt sick on August 20 while flying from the Siberian city of Tomsk to Moscow, prompting the plane to make an emergency landing in Omsk. The blogger was taken to hospital in a state of coma and was connected to a ventilator. He was airlifted to the Berlin-based Charite clinic in the morning of August 22. Its doctors said that indicators of poisoning had been found in his body.

On August 2, the German government said that German military toxicologists had found that Navalny had been exposed to a nerve agent of the Novichok family. Following this, Berlin and its Western partners demanded Moscow clarify the circumstances of the incident and warned they would look at possible sanctions against Moscow.

The Russian side stresses that it is interested in a thorough investigation of the incident but has not yet received any reply from Germany to its inquiry. Apart from that, Moscow points to the fact that no toxic agent had been spotted in Navalny’s samples before he was taken to Germany whereas the latter has given no evidence to back its theory.

On Tuesday, top diplomats of the G7 group of nations urged Russia to punish those responsible for the incident with Navalny's "poisoning."