Venezuela Aims to Overcome Effects of US Sanctions with New Legislation

TEHRAN (defapress) – Venezuela is working out a new law that will help overcome the effects of US sanctions imposed on the country, Venezuelan President Nicolas Maduro announced.
News ID: 82133 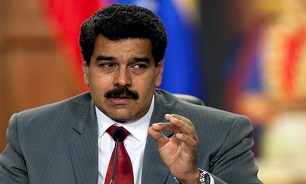 "We are working on a new anti-sanctions law … It is a constitutional law against US criminal sanctions. We will submit it to the National Assembly on Tuesday," Maduro said on Sunday, as broadcast on his Twitter account.

According to the Venezuelan president, a new poll will be carried out to find out what kind of damage various sectors of the country’s economy have suffered because of US sanctions.

The new law will include measures that will alleviate negative economic, financial and social effects of US sanctions, Maduro said, Sputnik reported.

A lot of the western sanctions introduced against Venezuela have targeted the country's state-run oil and gas company Petroleos de Venezuela (PDVSA) and its subsidiaries, in an attempt to seize its foreign assets and prevent the firm from completing transactions.

On Monday, the US announced new sanctions against Maduro, imposed over his cooperation with Iran.

On Tuesday, the US Treasury Department's Office of Foreign Assets Control (OFAC) announced fresh sanctions against five Venezuelan individuals. The Treasury Department said they were current or former members of the Venezuelan government who had allegedly colluded with Maduro in a scheme "to manipulate" the parliamentary elections and to undermine any credible opposition challenge to the government. Maduro condemned the sanctions calling them illegal.

In January 2019, Venezuela plunged into a political crisis when the then-head of the opposition-controlled National Assembly, Juan Guaido proclaimed himself interim president in a bid to oust reelected President Maduro from power. The United States and most of Western countries have endorsed Guaido and slapped crippling sanctions on Venezuela. Russia, China, Iran, Turkey and other nations have supported Maduro.