TEHRAN (defapress)- Syria’s Permanent Representative to the United Nations, Bashar al-Ja’afari, has denounced economic sanctions imposed by the United States on his war-ravaged country as one of the daunting challenges the Damascus government faces on the path of reconstructing the country and bringing the Syrians’ life back to normal.
News ID: 82239 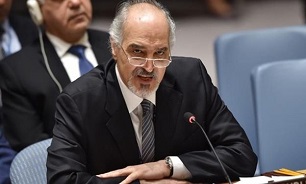 Speaking at the 75th session of the Second Financial and Economic Committee of the UN General Assembly on Thursday, Ja’afri called on the UN not to strictly limit its activities to the humanitarian aspect, but to extend them and include development projects, presstv reported.

He also urged the world body to stay away from politicization bids and offer the necessary support that the Syrian government needs to foster development in the crisis-ridden Arab country.

“One of the greatest challenges facing Syria is the unilateral and coercive measures against Syrian people, and the UN Secretary General [António Guterres] has called for their removal in light of COVID-19 (coronavirus) pandemic,” the diplomat pointed out.

The United States recently imposed a round of sanctions against Syria known as the Caesar Syria Civilian Protection Act.

The sanctions came into effect on June 17 -- six months after being signed into law by US President Donald Trump -- targeting individuals and businesses anywhere in the world that operate directly or indirectly within the sphere of Syria's economy. This includes entities that help the Arab country produce oil or fight terrorism in any way.

Elsewhere in his remarks, Ja’fari reiterated Syria’s condemnation of the Israeli occupation of the strategic Golan Heights as well as Palestinian territories, including East Jerusalem al- Quds.

The Syrian UN ambassador went on to say that the Tel Aviv regime incessantly loots and exploits natural resources in the occupied Golan Heights and Palestinian lands, harming and endangering lives in the areas.

Israel seized the Golan Heights from Syria in the closing stages of its 1967 Six-Day War with Arab countries, which also saw the regime occupy the Palestinian territories of the West Bank, East Jerusalem al-Quds and the Gaza Strip.

The Tel Aviv regime unilaterally annexed the Golan Heights in 1981 in a move not recognized internationally.

Syria has repeatedly reaffirmed its sovereignty over the Golan Heights, saying the territory must be completely restored to its control.

In March 2019, US President Donald Trump signed a decree recognizing Israeli “sovereignty” over the occupied Golan during a meeting with Israeli Prime Minister Benjamin Netanyahu in Washington.