Developed, independent Afghanistan for benefit of all 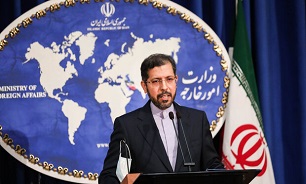 Referring to the meetings of Head of Afghanistan’s High Council for National Reconciliation Abdullah Abdullah with Iranian officials, Khatibzadeh said, "He had a meeting with Iranian Foreign Minister yesterday and will also meet with other officials of the country on developments in Afghanistan, inter-Afghan talks and bilateral issues."

Stating that Iran considers an independent, developed and peaceful Afghanistan for the benefit of all, he added, "Developed and independent Afghanistan has been a constant demand of Iran and we have made and will continue to strive for this purpose."

"We think that Iran can be a genuine contribution to the inter-Afghan talks, which will result in the pride and success of the Afghan government and people and the preservation of their achievements," he noted.

Head of Afghanistan’s High Council for National Reconciliation Abdullah Abdullah has arrived in Tehran on Sunday for a three-day stay and meeting with a host of officials including President Hassan Rouhani and Foreign Minister Mohammad Javad Zarif.