TEHRAN (defapress)- Iran is due to host Eurasian Economic Union (EAEU)’s upcoming meeting in November to prove ineffectiveness of the US sanctions by cooperation with the regional states.
News ID: 82347 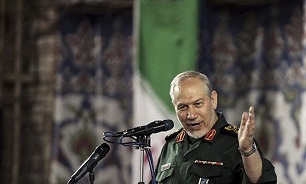 The EAEU’s upcoming gathering is to be held in Bandar Anzali on November 17, a coordination meeting in the Northern Iranian port city decided on Tuesday.

“By holding this [EAEU] meeting, we want to relay this message to [our] enemies that the strategy of maximum pressure and oppressive sanctions against the Iranian nation has been defeated,” Top military Aide to the Supreme Leader of the Islamic Revolution Major General Yahya Rahim Safavi said.

Eurasia is looked upon as the platform that helps open up Iran’s economy in the face of the US’s sanctions, Rahim Safavi said as he was chairing the coordination meeting in his capacity as head of Iran's Geopolitics Association.

He then explained how the Islamic Republic was drawing on the economic opportunities that were being offered by the geographical stretch of the world.

Rahim Safavi said using the economic capacities and transit corridors that were being provided by the Caspian Sea’s maritime countries, the Islamic Republic was tapping into two strategic channels of international interaction and cooperation. An eastward channel passing through the littoral states connects Iran to China via Central Asia, while a westward one links the Islamic Republic to Russia, Kazakhstan, Belarus, Kyrgyzstan, and Armenia, the official noted.

Inside the EAEU, Iran plays an indispensable role by serving as a “transit crossroads” connecting southern and northern Eurasian countries and establishing a similar link between the eastern and western parts of intercontinental sphere, he noted.

“The Americans and Europeans understand the meaning and concept of these new relations and the message of this international meeting well,” Rahim Safavi remarked.

He reminded how Iran’s northern ports could significantly help the country perform the role of the economic intermediary.

The meeting by the organization -- an international body aimed at regional economic integration that provides for free movement of goods, services, capital, and labor -- is to focus on the geopolitical role played by free economic zones in advancement of relations among Eurasian countries.