TEHRAN (defapress) – US President Donald Trump lashed out against "ANTIFA SCUM" and the media Saturday night as violence continued in Washington, DC, where pro-Trump supporters gathered for the “Million MAGA March.”
News ID: 82543 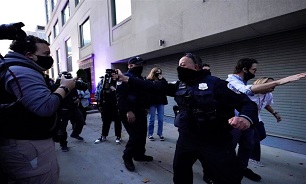 In a series of Twitter messages before midnight ET, the US president also blasted counter-protesters as "Human Radical Left garbage," retweeting a video that showed a man being sucker-punched and kicked on a Washington street earlier in the day.

Trump accused Antifa activists of returning under cover of darkness to cause mayhem, claiming the pro-Trump crowd had sent the leftists running "for the hills" during daylight hours.

He also blasted Washington Mayor Muriel Bowser, claiming the Democrat was not "doing her job," and urged the city's police force to "get going -- do your job and don't hold back!!"

The evening saw scattered confrontations and escalating violence as police reported at least 20 arrests as they tried to keep opposing groups separated.

Earlier in the day, counter-protesters turned out in opposition to pro-Trump groups rallying to question the results of the Nov. 3 presidential election, which showed Democrat Joe Biden denying Trump a second term in the White House.

The president himself even visited the demonstration -- traveling through the area in his motorcade.

Earlier Saturday, the march was largely peaceful. But as the sun went down, snippets of scenes shared on Twitter showed chaos had overtaken areas of the nation’s capital.

Authorities said one male demonstrator was stabbed multiple times near the intersection of New York Avenue and 11th Street, and sustained injuries that were not considered life threatening. It was not immediately clear which side he was on.

Daily Caller contributor Matthew Miller shared what he described as an "all out brawl between Proud Boys and Antifa in the streets."

The Proud Boys is a conservative group known for occasional brawls in other cities, including at least once in New York City and at several demonstrations with Antifa members on the West Coast. One of the group's leaders was stabbed during another protest in Washington during post-Election Day demonstrations.

People wearing the group's colors, black and yellow, cropped up in numerous photographs and videos from the demonstrations.

The video from Miller showed two groups trading blows in an intersection as onlookers chanted profanities.

City police said they’d made at least 20 arrests – three of which involved assaults – but a total count wasn’t expected until Sunday morning. At least two police officers were injured and authorities confiscated seven firearms, according to a city spokeswoman.

They closed off streets and part of Washington's downtown, already home to boarded up stores and offices.

In some places, police physically stood between groups of Trump supporters and counter protesters, chanting or carrying signs and banners emblazoned with Antifa and Black Lives Matter slogans, to keep them separated.