TEHRAN (defapress) – Stating that the United States creates insecurity to sell its military weapons, Top Military Aide to the Leader of the Islamic Revolution said that Iran is the axis of security stability in the region.
News ID: 82574 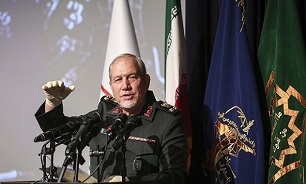 Yahya Rahim Safavi referred to Iran as a strategic connecting point between Asia and Europe, saying the country has an irreplaceable and unique geopolitical position in the world.

Iran is the leading power in the West Asian region and has a high capacity in various fields, including technology, he added.

Iran has built its relations with Eurasian countries on the basis of common interests and threats, he said, adding that Iran is the axis of security stability in the region and the safest country in Southwest Asia.

Stating that behind every insecurity in the region, there are traces of American arms companies, Rahim Safavi said that the United States creates insecurity to sell its military weapons.

He highlighted that Iran is a strong, stable and secure country that can also play a role in creating security in Eurasia.