TEHRAN (defapress) – Iranian Foreign Minister Zarif stressed the need to lift oppressive and unjust sanctions against the Syrian government and people, especially in the period of the coronavirus pandemic.
News ID: 82600 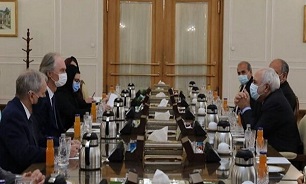 He made the remarks in his meeting with UN Special Envoy for Syria Geir O. Pedersen on the latest developments in Syria.

Referring to the sabotage of some countries in the process of political settlement of the Syrian issue, Mohammad Javad Zarif said, "In recent years, there have been good opportunities to end the crisis in Syria, but each time we have faced neutralizing efforts of some countries to destroy the opportunities."

Zarif also stressed the need to lift oppressive and unjust sanctions against the Syrian government and people, especially in the period of the coronavirus pandemic.

During the meeting, Pedersen also briefed Iranian Foreign Minister on the latest situation of the Syrian Constitutional Review Committee and his efforts to hold the next meeting.

Referring to the cooperation of the Islamic Republic of Iran with the United Nations in resolving the ten-year crisis in Syria, Pedersen stressed the importance of Iran's role in this process.

On Saturday, Pedersen, who is visiting Tehran with a delegation for talks with the Iranian officials, held a meeting with Senior Assistant to Iran’s Minister of Foreign Affairs in Special Political Affairs Ali-Asghar Khaji.

In the meeting, Khaji voiced support for Pedersen’s efforts to pursue a political solution to the crisis in Syria and the continuation of holding the Syrian Constitutional Committee meetings.

Pedersen praised Iran for its efforts to support the political processes for the settlement of the crisis in Syria.