Trump Faces Rising Pressure from Allies to Concede to Biden 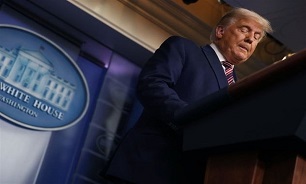 Several key allies for Trump appeared to lose their patience over the weekend. Senators Lisa Murkowski of Alaska and Kevin Cramer of North Dakota - one of Trump's staunchest allies - on Sunday called for the transition to Biden to begin.

Senator Pat Toomey congratulated Biden on his victory after Trump suffered another legal defeat in Pennsylvania.

The comments show a growing chorus within the party acknowledging that Biden won the election - or is all but certain to - and that delaying the transition of power risks impeding critical programs like the US response to the coronavirus pandemic. Still, only a minority of Republicans have spoken out, and several have taken a hedged stance that Trump should begin the transition even as the legal fight continues.

But even the court challenges are losing support.

Larry Hogan, the Republican governor of Maryland who's an outspoken Trump critic, told the president to "stop golfing and concede." Other national-level figures, most notably Majority Leader Mitch McConnell, have declined to speak out so far.

But the president's time is running out, as states including Michigan and Pennsylvania prepare to certify their election results as soon as Monday, sealing Biden's victory.

"It's past time to start a transition, to at least cooperate with the transition. I'd rather have a president that has more than one day to prepare, should Joe Biden, you know, end up winning this," Cramer told Meet the Press on Sunday.

Cramer said the election is "very likely" over but isn't yet over, and gave Trump leeway to keep up his legal fight. "I don't know why we're so easily offended by a president that's carrying out all of his legal options in court." Biden's team has become more vocal in calling for the transition to start, warning that the delay could impede the rollout of a coronavirus vaccine and hinder other key government programs. Biden plans to begin naming his cabinet this week.

Trump has pursued a range of unconventional moves to undo the election result and has continuously claimed without substantiation that the vote was rigged. Trump has even pressured state lawmakers to ignore the results and award their state to him instead of Biden, a move that no senator has backed and Toomey called illegitimate.

Most senators, though, have stayed silent, avoiding the risk of angering the outgoing president who remains popular with Republican voters and who has a record of attacking those who cross him politically.

Angering Trump and his supporters risks suppressing GOP turnout in a pair of runoff elections in Georgia that will determine whether Republicans keep a majority in the Senate.

On Sunday, Senator David Perdue of Georgia backed Trump's request for a third count of Georgia's ballots, this time including a review of signatures on absentee ballot envelopes - even though the ballots have long since been separated from those envelopes to ensure voter privacy.

Trump has increasingly sparred with Republicans who demand proof of fraud, such as House Republican Conference Chair Liz Cheney, or who say they think Biden won, such as Ohio Governor Mike DeWine. The president is now openly stoking a primary challenge against DeWine.

Trump's also racing ahead to lock in his policies, such as accelerating troop withdrawals from foreign posts and ratcheting up tension with China. He briefly took part in Group of 20 sessions this weekend, but left each day's program early to head to his golf course.

Republican dissent had been growing before the weekend. Senator Mitt Romney said Trump is trying to "subvert the will of the people." Retiring Senator Lamar Alexander said Friday that Biden "looks like he has a very good chance" of winning. Former president George W. Bush has also congratulated Biden.

But Trump's attempts suffered another blow Saturday, when a federal judge in Pennsylvania threw out a lawsuit aimed at blocking certification of the state's election results. Toomey said that Trump had "exhausted all plausible legal options" in Pennsylvania, and that it was time to concede that Biden had won.

Calls for Trump to either present evidence or concede have also grown in the aftermath of a press conference Thursday, featuring lawyers Rudy Giuliani, Jenna Ellis and Sidney Powell.

They alleged a range of unspecified fraud, with Powell accusing Venezuela, China and George Soros of conspiring to defraud American voters and insisting that Trump had won. By Sunday, the Trump campaign had distanced itself from Powell. In a joint statement, Giuliani and Ellis said that Powell isn't a lawyer for the Trump campaign or Trump personally.

But even if legal challenges continue, many Republicans say the transition process should still be underway to ensure a smooth handover on critical issues like the coronavirus task force's work fighting the pandemic.

"Clearly, it would be better if the Biden task force was able to coordinate, learn from and provide insight to and from the White House task force. It would just be better," said Michael Leavitt, a former Utah governor who served in Bush's cabinet, including as health secretary. He, like many Republicans, has argued that the legal fight doesn't preclude a transition process from starting. "I'm one of those who believes these processes can be carried out simultaneously, and should be." Moncef Slaoui, one of the senior officials leading the Trump administration's push to fast-track a vaccine, told Meet The Press on Sunday that he'd been instructed not to share any details with anyone not in the administration. He said he thought the process would go smoothly regardless.

"All the decisions are made. The train is running. Whether one administration or the other, it doesn't frankly make a difference. I hope there is no disruption in any way," Slaoui said.