TEHRAN (Defapress) - The head of public relations of the 1st Navy District of the Army said that the fire of Khark ship had started from the engine house and the forces were transported to the shore from the accident site by tow and helicopter.
News ID: 83416 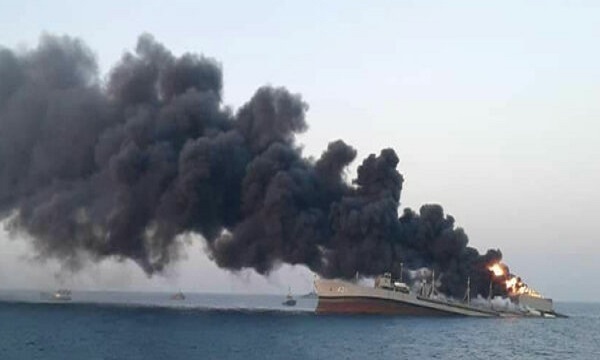 The expedition forces tried to extinguish the fire of Khark ship for 20 hours without interruption, but the fire was so intense that half of the ship's hull melted and sunk later off, said Behzad Jahanian.

The Khark ship, which had been on fire since 11 a.m. yesterday, sank off Jask Port at around 8:30 a.m. today, and efforts to save it failed, he added.

He noted that 20 people suffered minor injuries in this incident, who were taken to the shore, and among those who had more injured were taken to the Naval Hospital in Bandar Abbas, adding that now these people are in good health.

The Khark ship had 400 personnel at the time of the accident, including training personnel and crew, all of whom were rescued, and the fire did not cause any casualties, Jahanian added.

According to the Iranian Army, an auxiliary ship dubbed Khark caught fire and sunk hours later off Jask Port, south of Iran.

The ship had been dispatched to international waters some days ago, according to a statement by the Navy.

The vessel, which acted both as a platform for support and also for training new forces, faced a fire break-out in one of its systems on Tuesday, reads the statement, adding that all trainees left the vessel and transferred to Jask Port and different forces tried to put out the fire.

In a later statement, the Navy said that efforts for extinguishing the fire have been fruitless and Khark vessel has sunk.