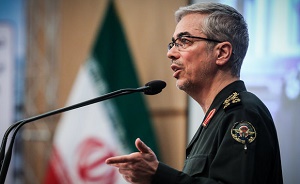 Chief of Staff of the Iranian Armed Forces Major General Mohammad Bagheri said, despite all conspiracies of enemies, Iran has succeeded in maintaining its independence and territorial integrity as well as thwarting enemy plots.

"Imam Khomeini, upon accepting the United Nations Security Council resolution 598 on 20 July 1987, told IRGC commanders that the Holy Defense (1980-88) had led to preservation of Iran’s territorial integrity and failure of enemies’ expansionist plans,” he recalled.

The official underlined that the Islamic Republic of Iran has been through several ups and downs since the imposed war ended; "in the meantime, independence and solidarity of the country have been fully protected against enemies’ conspiracies.”

Maj. Gen. Bagheri went on to say that self-sufficiency was yet another positive outcome of the Holy Defense in a way that Iran is now manufacturing almost all military equipment.

he official explained that Resistance Economy, encouraged by the Iranian Leader, mainly called for an economy which is self-reliant and self-sufficient.

Iran’s Army Chief stated that, despite all sanctions and restrictions, Iran is now a major and self-contained manufacturer of missiles; "a need is also felt for resistance in cultural sectors.”

"Holy Defense also boosted the country’s national self-esteem at a time when we were confronting the whole world,” stressed the commander noting that the imposed war also gave us lessons on innovation and creativity.

Bagheri asserted that, in view of current conditions, no world power dare intrude Iran since we have overcome all restrictions.

He enumerated other positive outcomes of the Holy Defense including national unity and national participation.

"Since the time world powers made presence in neighboring countries, Leader of Islamic Revolution Ayatollah Khamenei prudently managed the new conditions and deterred all threats.”

At the end of his remarks, he said Iran enjoyed security to the extent that domestic and foreign investors were confidently making investments inside the country.