Iran ready to cooperate with Iraq army in shared borders

TEHRAN (defapress) –Chief of Staff of the Iranian Armed Forces Maj. Gen. Bagheri said Iran only accepts the unified and integrated Iraq legally governed by the constitution and the vote of Iraqi people, and doesn’t recognize separation of a part of the country.
News ID: 66078 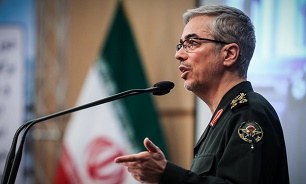 Chief of Staff of the Iranian Armed Forces Major General Mohammad Bagheri made the remarks following the meeting with Iraq’s chief of army, expressing his felicitations on the victories of Iraq’s army in the fight against terrorists.

The two sides discussed Iran’s unconditional support of Iraq’s government and army as well as their disapproval of Kurdish referendum of independence in the North of Iraq.

Bagheri stressed that Iran only recognizes its shared borders with the official and legal government of Iraq and it regards no sovereignty for any nonconformist party in the North of Iraq.

He went on to say "our friends from Iraq’s army will visit the shared border from Iran’s side tomorrow, and we voiced our readiness to cooperate with Iraq’s government and army for military establishment in the region.”

Iraq’s chief of army, for his part, said Iraq was attacked by the terrorists, but they fought back and won. They will keep fighting to free all the cities under siege and rebuild their country.