who trump's enmity is in favor of

Enemies and hostile remarks of Tramp have united the people and the authorities, increase the support of the people of the Revolutionary Guards and its role in fighting terrorism and the development and enhancement of our country's defense and missile capabilities, all of which are conducive to the security of our country.
News ID: 66388 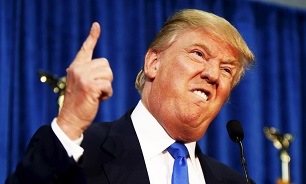 According to defapress reporter: Firstly, the hostility of the United States and its officials, more than any other time our people have been United, and in addition also witnessed the Union all the authorities and especially the unity of the people and the authorities. For our country and strategically important, and if it was going to be inside the country, will not be possible at this level, but will be beneficial

In a speech to the UN General Assembly, tried to trump the gap between people and authorities, and between themselves and find a partner for Its claims in Iran, but it has been shown that not only has no one in Iran will go along with him, but a wave of Tweets and Anti routing in social networks emerged in Iran.

The unity of the Islamic Republic of Iran created in the aftermath of the hostilities and ignoring the United States, a massive and important capital to strengthen the security of our country is stable, because it is in our country, unlike some countries of the region that the rebound has been renting them security and they think that the equipment purchased can be Your security will supply basic public safety and security is stable and no higher than public safety. So at first glance of the people and the armed forces of the hostility of the United States armed forces, because profits are also seeking to establish security in the country and even in their program are trying to increase public safety

The second part of the enemy of intrigue about the Islamic Revolution Guards Corps, which was called the revolutionary terrorists. It should be noted that the first days of the Islamic Revolution Guards Corps until the revolution and its achievements against a divided opposition that malignant in the hands of the United States, terrorism and sabotage protection. From the first days of its formation, the guards face in Kurdistan with conspiracy, which is a conspiracy behind it today against Iran President speaks

Revolutionary Guard after it was involved in a war against the Iraqi Ba'ath regime that maybe Saddam supposedly fighting, but the United States and pro-Saddam's attack on Iran was the main and each time that Iran opposed Saddam himself, the Americans entered the scene of the fighting were Iranian oil rigs and. At the same time, the guards with a phenomenon called the Islamic Revolutionary Guard Corps was facing nowadays that ISIS repeats the behavior and literally the terrorists. These terrorists were supported by the United States and the West, and after that, Saddam and their enemies and hostility with the nation of Iran. Hypocrites met today with that Tramp, from the words of the Iranian anti-and anti-welcome to the public, and at the same time the Prime Minister of the Zionist regime.

But the word that Trump was made against the revolutionary guards, the result was that people once again as President of the Islamic Republic in the hearts of the people, as the revolutionary guards reacted to the missile attacks daesh  deir al sal so today the army and the armed forces over (G) all popular and support from the people and it is also a strategic and important asset for our armed forces.

The third issue is that Tramp is talking about and this quickly and clearly to the authorities and the people of our country responded, the subject was a missile. An issue that Americans have tried repeatedly with the authorities on the subject of our negotiations, as Secretary of State and the President of our country is not a debatable issue of missile defense. But authorities said that explicitly Tramp we asserted that in addition to talks on the issue of missile defenses, we want to develop their own missile power and in this regard, we will not let anyone defend himself and increase deterrence. From that perspective, the results of the speech is the President of the United States, increase the ability of the Islamic Republic of Iran and missile deterrence and security in our country as well as the result can be seen.

And the fourth point in the relationship with the words trump was that the question of the fight against terrorism by the Quds force of the revolutionary guards, and in particular the revolutionary guards more than before by the people and the authorities will support. People familiar with the purpose of fighting terrorism in Syria and Iraq by the Iranian revolutionary guards, a difficult task for people is that the Islamic Republic of Iran in the past few years has been able to do it, but the words have been trump it easier for the authorities of our country. What the Guards Corps in Syria and Iraq to follow, and with anger and hostility and he indicated that if the military presence, Damascus, Baghdad, and Arbil daesh occupies to the borders of Iran. So, words Trump also of the armed forces, particularly the al-Qods force, the intensity of the fighting with terrorism