The message of the revolution leader Bashar Al-Assad was offering

A letter from the Supreme Leader to the Islamic Republic of Iran was presented to the President of the country by the Chief of Staff of the Armed Forces who traveled to Syria.
News ID: 66559 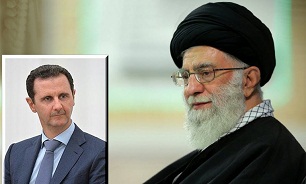 A letter from the leader of the Islamic Republic of Iran to the country's President by Chief of staff of the armed forces who had traveled to Syria, was presented.

The meeting on Thursday (07-19 August 2013) was held in Damascus on Friday and the major General said Bqheri leader always looking for your health and for Syria to pray.

Chairman of the Joint Chiefs of staff of the armed forces who on Tuesday (August 17, 2013), headed by high-ranking military delegation to visit Syria, the Syrian President, Syria's Army Chief of staff and the Defense Minister of the country, has been.

The promotion of military cooperation between Iran and Syria, and to consult, collaborate and cooperate for the continuation of the fight against terrorism, as well as reviews of solutions for stability and security in the region, aims to meet Gen. Baqeri from Syria..