New Round of Syria Talks to Begin in Astana on Monday

TEHRAN (defapress) - The seventh round of peace talks aimed at ending the Syria crisis will be held on Monday in the Kazakh capital, Astana.
News ID: 66753 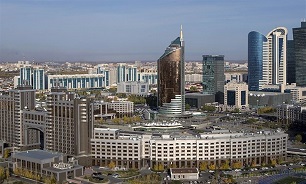 The two day talks, which will focus on strengthening the ceasefire that came into effect on December 30, have been brokered by Russia, Iran and Turkey.

The two-day meeting is also scheduled to address the release of captives and hostages, and humanitarian action on mines, Kazakh Foreign Minister Kairat Abdrakhmanov said on October six.

Representatives of the Syrian government, armed opposition groups, as well as delegations from the UN, Jordan and the US will attend the talks, he confirmed.

Diplomatic efforts to end fighting in Syria gained momentum in 2017 with the announcement of a ceasefire in the Arab country in early January.

The fourth round of those talks in May produced a memorandum of understanding on de-escalation zones in Syria, sharply reducing fighting in the country.

During the sixth round of Astana talks in September, Iran, Russia and Turkey agreed on a deal to establish and patrol a de-escalation zone in Syria’s northern Idlib province. In early October, Turkey deployed tanks and military vehicles on its Syrian border, building up military presence in Idlib.

According to a report by the Syrian Center for Policy Research, the conflict has claimed the lives of over 470,000 people, injured 1.9 million others, and displaced nearly half of the country’s pre-war population of about 23 million within or beyond its borders.