TEHRAN (defapress) – French President Emmanuel Macron said on Wednesday he would draw up a list of extremist organizations to convey to Saudi Arabia after its crown prince pledged to cut their funding.
News ID: 67189 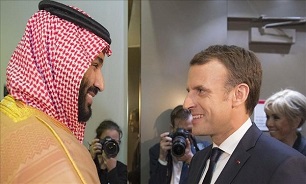 Saudi Arabia finances groups overseen by the Mecca-based Muslim World League, which for decades was charged with spreading the strict Wahhabi school of Islam around the world.

"He never did it publicly, but when I went to Riyadh (this month), he made a commitment, such that we could give him a list and he would cut the financing,” Macron said during an interview with France 24 television.

"I believe him, but I will follow up. Trust is built on results,” Macron added.