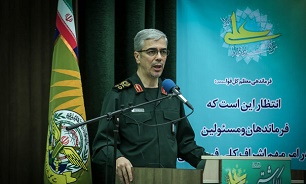 Maj. Gen. Mohammad Bagheri, Iran’s Chief of Staff of the Armed Forces gave a speech in Malek Ashtar festival Sunday where he felicitated the resistance front on its victories over the conspiracies of the global arrogance which manifested themselves through ISIL and other forms of terrorism and said "as the commander-in-chief of armed forces has stated and as historical experience shows, whenever the resistance front of the Islamic Revolution achieves a great victory, enemies of the Islamic Revolution make fierce determination to hatch new plots and conspiracies and place new obstacles in the way of the Islamic Revolution, the present situation being no exception either.”

Having expressed hope that the armed forces can take every possible measure in order to avoid being caught off guard, Maj. Gen. Bagheri said "only in this way can we continue along the paths of the Islamic Revolution with vigor and resolve.”

"Military intelligence, vigilance, caution and enhancing defensive and security powers are major steps in this respect, steps which we need to take steadily and strongly,” he added.

Iran’s Chief of Staff of the Armed Forces asserted that the philosophy of intelligence refers to the awareness of the commander of the details of what happens around him, and said "we can cite numerous examples in our own military and government and in regional events, where a shortage or lack of knowledge on the part of managers and commanders about their institutions and organizations has led to disasters and problems.”

"Every commander who has been successful in carrying out operations and fulfilling responsibilities successfully has already had total and detailed intelligence of all those who work under him,” he went on.

"Ayatollah Khamenei has variously stressed the importance and centrality of the concept of intelligence, and his statements have been officially communicated by the General Staff of the Armed Forces to the high ranking commanders of the armed forces,” he added.

Maj. Gen. Bagheri said that intelligence services play major roles in commanding the forces and provide the best guidance to the commanders in decision making and asserted "commanders must consider intelligence as a unique opportunity and an effective lever and use the intelligence agency in order to make the best decisions.”

"Two of the most fundamental requests of the leader of the Islamic Revolution are enhancing the defensive and the military powers of the armed forces, and as you know, whenever intelligence reports are submitted to the leader, he says that he is not satisfied with this much and believes that more can be achieved,” he asserted.

"Intelligence can serve to enhance military and defensive power as well by solving the key problems of the armed force. Intelligence agencies must identify problems precisely and present the commanders with effective approaches to solving them. That is why commanders must value intelligence,” he said.

"We also need to value our human resources greatly. Whether a mission is accomplished or fails, our human resources are responsible. Intelligence agencies must help to identify capable, efficient elements at different levels and help them to get promoted, so that work can be done by competent experts,” he said.

Maj. Gen. Bagheri concluded by saying "today we have fortunately made great developments in intelligence and the commanders of the armed forces take it into account in managing their forces.”