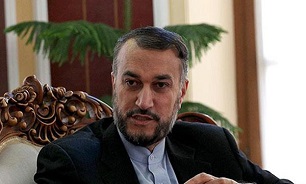 "Riyadh and Abu Dhabi's three-year military aggression against Yemen has reached the end of the line," Amir Abdollahian wrote on his Twitter account on Friday.

He underlined that Saudi Arabia and the UAE has failed in Yemen despite the US explicit support.

"The Yemeni people, Ansarullah and allies have resisted courageously; the solution for Yemen is only political and should be based on the Yemeni-Yemeni agreement," Amir Abdollahian added.

Saudi Arabia has been striking Yemen since March 2015 to restore power to fugitive president Mansour Hadi, a close ally of Riyadh. The Saudi-led aggression has so far killed at least 15,300 Yemenis, including hundreds of women and children.

The cholera outbreak in Yemen which began in April, has also claimed over 2,200 lives and has infected more than one million people, as the nation has been suffering from what the World Health Organization (WHO) describes as the “largest epidemic in the world” amid a non-stop bombing campaign led by Saudi Arabia. Also Riyadh's deadly campaign prevented the patients from traveling abroad for treatment and blocked the entry of medicine into the war-torn country.

According to reports, the cholera epidemic in Yemen, which is the subject of a Saudi Arabian war and total embargo, is the largest recorded in modern history.

Aid officials have also warned of the spread of diphtheria in war-torn Yemen, as WHO and officials with the international medical charity Doctors Without Border, announced that the diphtheria spread is inevitable in Yemen due to low vaccination rates, lack of access to medical care and so many people moving around and coming in contact with those infected.

The United Nations had described the current level of hunger in Yemen as “unprecedented,” emphasizing that 17 million people are now food insecure in the country.

A recent survey showed that almost one third of families have gaps in their diets, and hardly ever consume foods like pulses, vegetables, fruit, dairy products or meat, while the humanitarian food aid is reaching only a third of Yemen’s population.

More than 3 million pregnant and nursing women and children under 5 need support to prevent or cure malnutrition.

The United Nations has also warned that 8.4 million people in war-torn Yemen are “a step away from famine”, as Saudi Arabia and its allies are ceaselessly pounding the impoverished country.

"The lives of millions of people, including 8.4 million Yemenis who are a step away from famine, hinge on our ability to continue our operations and to provide health, safe water, shelter and nutrition support," Jamie McGoldrick, the UN's humanitarian coordinator for Yemen, said in a statement.

"The continuing blockade of ports is limiting supplies of fuel, food and medicines, dramatically increasing the number of vulnerable people who need help," he added.

The United Nations had warned that millions of people will die in Yemen, in what will be the world's worst famine crisis in decades, unless the Saudi-led military coalition ends its devastating blockade and allows aid into the country.

Aid agency CARE warned, as the country marks 1,000 days since conflict began, Yemen risks sliding into famine and further disease outbreaks unless all the country’s ports are fully reopened.

Mooij stressed that while some land, sea and air ports had recently reopened, the country’s main ports remained closed to commercial imports.

International aid agency Oxfam warned that Yemen was pushed ever closer to famine after 1,000 days of a brutal war, exacerbated by a crippling blockade of its key ports which is starving its people of food, fuel and medicine.