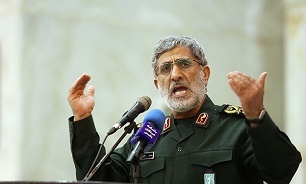 The conditions of the resistance front is improving day by day, Brigadier General Qa’ani said in an address to a conference about Palestine and “the liberation of al-Aqsa Mosque” held in Tehran on Monday.

“Our enemies always make moves that strengthen us,” he said, adding that according to Israeli sources, since the issue of the relocation of the US embassy to al-Quds (Jerusalem) was raised, the process of armament in the West Bank has sped up.

The commander further emphasized that the reason behind the US decision to relocate its embassy is the weakness of the country’s president and leaders of some Muslim countries.

US President Donald Trump officially declared Quds as the capital of Israel, despite warnings from around the world that the measure risks triggering a fresh wave of violence in the Middle East.