TEHRAN (defapress) – President Hassan Rouhani stressed that Iran and India’s relations are developing on a right and positive path, noting that several MoUs will be signed during his meeting with PM Modi on Saturday.
News ID: 68678 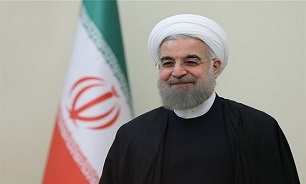 Speaking to reporters on Thursday before leaving for India, Iranian President Hassan Rouhani said his maiden visit comes at the invitation of Indian Prime Minister Narenda Modi, and in response to Modi’s trip to Iran back in May 2016.

The president maintained that one of the key objectives of his India visit is the Chabahar agreement, which has been described as a game changer for regional connectivity, creating a regional trade, investment and transportation hub with links from the Indian Ocean to Central Asia.

The $500-million trilateral agreement was signed between Iran, India and Afghanistan in May, which allows Indian goods to reach Afghanistan via the Iranian port without crossing Pakistan’s territory.

President Rouhani added that combating terrorism and other international issues will also be discussed between Iran and India as the two key NAM member states.

Rouhani divided his India trip into two parts, with his first stop being in Hyderabad, the capital of southern India's Telangana state, which will include cultural issues, such as meeting with Muslim scholars and Iranian expatriates.

The second part of the visit will take place in New Delhi on Saturday and include political and economic talks.

The President is accompanied by a high-ranking politico-economic delegation, including Foreign Minister Zarif, Oil Minister Zanganeh, Minister of Roads and Urban Development Akhoundi, Minister of Industry, Mine and Trade Shariatmadari, and his Chief of staff Vaezi.

Representatives from the two sides’ private sectors will hold a joint trade forum to confer on various capacities and opportunities for cooperation and development of trade ties.