TEHRAN (defapress)- Iran's Red Crescent Society (IRCS) has mobilized its members to start operations to transfer the dead bodies of passengers killed in the recent ATR-72 passenger plane crash in a far-fetched mountainous area in the Central parts of the country.
News ID: 68764 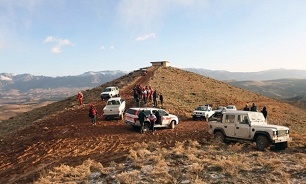 After the plane wreckage of the ATR plane was found on Tuesday morning, all forces and helicopters are being mobilized to transfer the dead bodies of those killed in the plane crash on Sunday, Secretary-General of the IRCS Mahmoud Mahmoudinasab wrote on his website on Tuesday.

A spokesman of the Islamic Revolution Guards Corps announced on Tuesday that the IRGC helicopters have found the debris of the Iranian passenger plane that crashed on Sunday.

Head of the Islamic Revolution Guards Corps Public Relations Department and IRGC Spokesman General Ramezan Sharif confirmed that the IRGC helicopters have found the wreckage of the crashed ATR-72 plane on the heights of Dena mountain in Central Iran on Tuesday morning.

Authorities lost track of a passenger plane with 66 people on board on Sunday as it traveled from the capital to Yasouj in Central Iran.

The ATR plane belonging to Aseman airline company was en route from Mehrabad international airport in Tehran to Yasouj, the center of Kohgilouyeh and Boyer Ahmad province in Western Iran, at 7:55 local time on Sunday morning and it disappeared from the radar of air traffic controllers 50 minutes later, Head of the public relations department of Aseman Airline Mohammad Taqi Tabatabayee told FNA on Sunday.

Also, Head of Iran's Emergency Medical Services Pir-Hossein Kolivand told FNA that the plane has crashed in a region near Semirom in the Central province of Isfahan.

The head of the Isfahan Province medical emergency center said on Tuesday that helicopters could not land at the crash site to transfer the bodies due to adverse weather and topographical conditions.

The captain of the helicopter that spotted the wreckage said the plane had crashed 30 meters below a hilltop.

The fuselage has been broken into pieces and only a part bearing Aseman Airlines logo is visible, he added.

An official of the IRCS had said earlier that 80 search teams were conducting an operation at Mount Dena in the Zagros mountain range after weather conditions improved.

Four IRCS helicopters had flown over the region as part of efforts to find the crash site, he added.

Russia's Ministry of Emergency Situations (EMERCOM) provided Tehran with the coordinates of the crash site of the ATR-72 passenger plane last night. Moscow's aid came after Russian Minister of Emergency Situations Vladimir Puchkov received a request of assistance from the Iranian government to determine the coordinates of the crash site by means of space monitoring.

The Russian ministry provided the Iranian military attache in Moscow with the needed data and information which was then relayed to the Iranian foreign ministry, Iran's Civil Aviation Organization and a representative of the country's crisis headquarters.

The data provided by the Russians suggested that the wreckage could be found in a mountainous region 30.10.18N in latitude and 34.10.32E in longitude some 80km North of Semirom in the Central province of Isfahan.

The Civil Aviation Organization of the Islamic Republic of Iran announced on Monday that a 7-strong French delegation, including 4 representatives of ATR company, arrived in Tehran last night to check the black box of the crashed plane.

Also, the Canadian company which produces the ATR engines has voiced readiness to send a team of experts to Iran.

Meantime, Aseman airline company officials said on Sunday night that the plane had undergone a heavy C-check in October, adding that no malfunctions were witnessed in flight checks and maintenance reports before the Sunday flight.

The latest reports from areas near the crash site said that the region has been searched through satellite positioning, 6 drone units have been sent to the crash site to find and locate the debris of the aircraft and 26 relief and rescue teams, supported by 3 helicopters, as well as a team of 105 mountain climbers were sent to the region.

Also, an official at Iran's forensics organization said that genetic sampling of family members of those who have possibly been killed in the plane crash has started.

Tabatabayee said on Sunday his company cannot yet confirm the death of all passengers and crew members on board the ATR-72 plane.

Meantime, Head of Iran's Civil Aviation Organization (CAO) Ali Abedzadeh said that the cause of the crash will be revealed only after plane's black box is found and its data is extracted.

Iranian President Hassan Rouhani ordered Roads and Urban Development Minister Abbas Akhoundi to form a headquarters to clear the cause of the incident. He also extended his condolences to the bereaved families of those killed in the crash.

In a similar message on Sunday, Supreme Leader of the Islamic Revolution Ayatollah Seyed Ali Khamenei also condoled the families of the victims as well as the Iranian nation.