TEHRAN (defapress) - Two US naval aviators were declared dead after their FA-18 fighter jet crashed off the coast of Key West, Florida, the US Navy said.
News ID: 69210 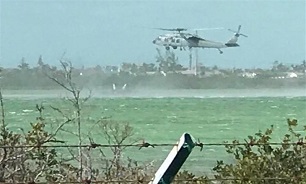 According to the US Navy, the crash occurred on Wednesday around 4:30 pm. The Navy added that the jet, which was on a training flight, is part of Strike Fighter Squadron 213, known as the Blacklions, CNN reported.

Rescue crews recovered both aviators from the water, the Navy said in a tweet. They were taken by ambulance to Lower Keys Medical Center.

The jet crashed on approach to Naval Air Station Key West, and the cause of the crash is under investigation, according to the tweet.