Iran’s Ambassador to the United Nations Gholam Ali Khoshroo condemned Israel for the recent mass killing of Palestinians near the Gaza border and deplored Washington’s moves against the international law, including the relocation of its embassy to al-Quds (Jerusalem).
News ID: 70233 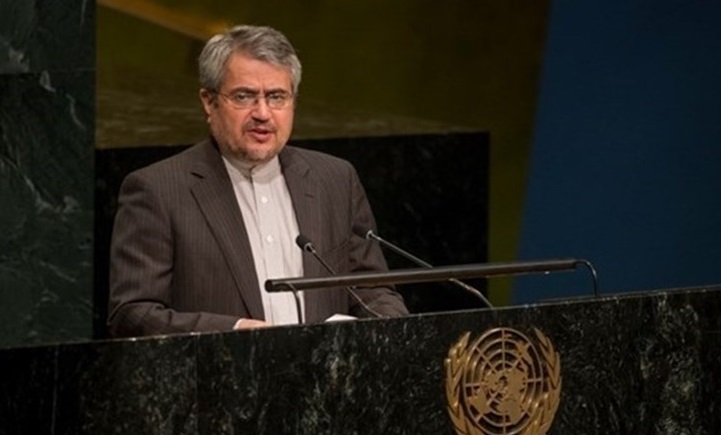 TEHRAN (Defapress) – “On 14 May, Netanyahu and his guests celebrated the illegal move of the US embassy to Jerusalem, violating and ridiculing international law as well as many UN resolutions regarding the situation of Jerusalem and inalienable rights of the Palestinians,” Khoshroo said, addressing a UN Security Council open debate titled “Upholding International Law Within the Context of the Maintenance of International Peace and Security” in New York on Thursday.

“At the same time, the Israeli army was making its latest bloodbath in Gaza, killing more than 60 and injuring more than 2,500 unarmed Palestinian protesters in a single day; a shameful violation of IHL and international human rights law. These criminal acts happened with total impunity extended to the Israeli regime by the United States.”

Following is the full text of the Iranian envoy’s statement:

In the Name of God, the most Compassionate the most Merciful

Allow me to first express my Delegation’s appreciation to the Polish Presidency for convening this open debate. Indeed, the choice of this crucial topic for our debate is very appropriate and timely.

First and foremost, I align myself with the statement made by the representative of the Bolivarian Republic of Venezuela on behalf of NAM and thank the Secretary-General and the President of the International Court of Justice for their inputs.

Since the establishment of the United Nations, maintaining international peace and security has been one of the key concerns of the international community. With that in mind, prohibition of the threat or use of force as enshrined in the UN Charter is a sine qua nonachievement of the United Nations. Unfortunately, certain member states tend to use intimidation, use or threat of force to impose their will over others. These practices undoubtedly lead to disorder, instability and insecurity as we see in some regions, especially in the Middle East.

At the same time, some developing countries are unjustly targeted by arbitrary unilateral economic sanctions. The morally wrong and ethically unjustified unilateral measures not only defy the rule of law at the international level but also infringe upon the right to development that ultimately leads to the violation of basic human rights. It is a fact that such measures have almost always been initiated by only one member state, the United States, that is apparently addicted to sanctions wherein they see sanctions and the use of threats as the only tools in its toolbox in pursuance of its agendas. These practices obviously contravene international law and the Charter of the United Nations, especially where they deprive nations of their lawful and legitimate rights under treaties as well as fundamental human rights of individual citizens in the targeted States. In many cases, unilateral sanctions are imposed as a result of extraterritorial application of domestic legislations against legal and natural persons in other countries in spite of many General Assembly resolutions against such these unlawful measures.

Unilateral measures, either in the form of illegal recourse to war, occupation, aggression or denying the sovereignty of member states or waiving the immunity of states under an unsubstantiated legal doctrine, are obvious manifestations of the rule of power, not the rule of law. These practices can undoubtedly be qualified as internationally wrongful acts that negatively affects a rule-based international order and endanger maintenance of peace and security.

It is also a well-established principle of law enshrined in numerous international instruments, including treaties and General Assembly resolutions, that States should implement in good faith what they have pledged to do. One of the primary goals of the United Nations, as stated in the Preamble to the Charter, is to establish conditions under which justice and respect for international obligations can be maintained.

It is ironic that while we have this open debate and during the current month, the international community witnessed two specific situations wherein the credibility of international law and international agreements were severely damaged:

On 8 May 2018, the United States announced its unilateral and unlawful decision to withdraw from the Joint Comprehensive Plan of Action (JCPOA) and to re-impose all US nuclear-related sanctions. It was a material breach of the JCPOA and Security Council resolution 2231 (2015) to which the JCPOA is an integral part. The official announcement came after multiple prolonged cases of violation of the JCPOA by the United States. These cases include bad faith nominal implementation, undue delays, new sanctions and designations, derogatory anti-JCPOA statements, refusal to issue necessary licenses particularly in the last 16 months as well as systematic and concerted efforts to sabotage the deal by actively dissuading others to do business with Iran. Considering the fulfilment by the Islamic Republic of Iran of its commitments under JCPOA, as repeatedly and consistently verified by the IAEA, these acts and omissions of the United Sates constitute a complete disregard for international law and the UN Charter as it undermines the principle of peaceful settlement of disputes and endanger multilateralism and its institutions. It is a regress to the failed and disastrous era of unilateralism, and encourages illegality.

On 14 May, Netanyahu and his guests celebrated the illegal move of the US embassy to Jerusalem, violating and ridiculing international law as well as many UN resolutions regarding the situation of Jerusalem and inalienable rights of the Palestinians. At the same time, the Israeli army was making its latest bloodbath in Gaza, killing more than 60 and injuring more than 2,500 unarmed Palestinian protesters in a single day; a shameful violation of IHL and international human rights law. These criminal acts happened with total impunity extended to the Israeli regime by the United States.

The violators shall be compelled to bear the responsibility for their wrongful acts.