US Soldier Killed, Five Wounded in 'Enemy Attack' in Somalia

A US special operations soldier has been killed and five military personnel - including four American service members - wounded in an "enemy attack" in Southwestern Somalia, according to US officials.
News ID: 70620 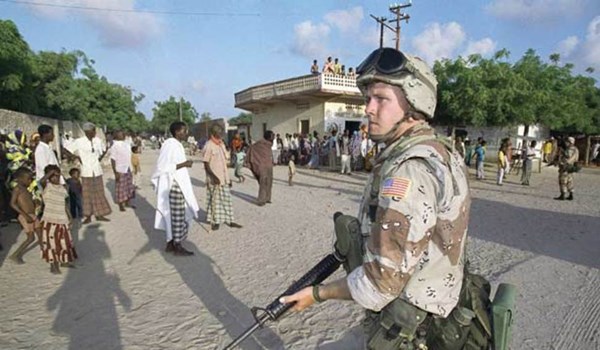 TEHRAN (Defapress)- The US military's Africa Command said in a statement on Friday that the attack occurred in Jubaland, where a large force comprising about 800 Somali, Kenyan and US troops were conducting an operation against al-Shabab fighters, Al-Jazeera reported.

The multinational force "came under mortar and small-arms fire at approximately 2:45 pm Mogadishu time [11:45 GMT], killing one US service member and injuring four US service members and one partner force member," the US military's Africa Command said in a statement.

The statement did not clarify whether the "partner force member" was part of the Somali or Kenyan armed forces.

Although one of the wounded Americans did not receive additional care after being treated in the field, the other three and the wounded local soldier were medically evacuated for follow-up care.

The troops had been on a mission to clear al-Shabab from contested areas as well as villages the armed group's fighters controlled "and establish a permanent combat outpost" to expand the reach of the Somali state, the US military's Africa Command said.

Al-Shabab, an al-Qaeda-linked armed group, is fighting to overthrow Somalia's central government and establish its own rule based on its interpretation of Islamic law in the Horn of Africa country.

The group used to control most parts of the country, but since 2010, its fighters have been removed from most major towns and cities.

In 2011, the armed group was pushed out of the capital, Mogadishu, by Somali troops backed by hundreds of soldiers from the African Union Mission in Somalia (AMISOM) after months of deadly street battles.

But al-Shabab has continued to carry out deadly suicide bomb attacks in Mogadishu, while retaining a strong presence in other parts of the country.