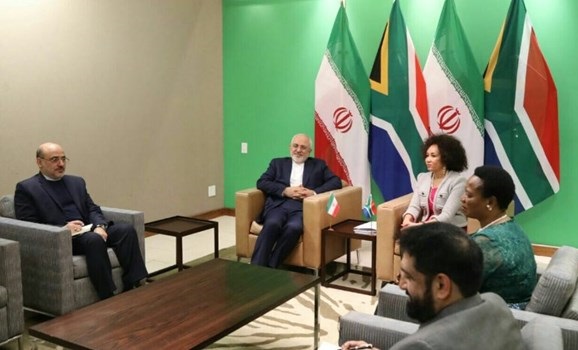 TEHRAN (Defapress)-"Pretoria supports the nuclear deal with Iran," Sisulu said during the meeting with Zarif in the South African capital on Tuesday night.

The South African foreign minister reiterated that the European countries should practically show their commitment to the nuclear agreement.

Zarif and Sisulu, meantime, discussed the latest status of Tehran-Pretoria relations, and vowed to their utmost to further broaden mutual cooperation.

Upon arrival in Pretoria, Zarif said that Iran has always stood by the South African people.

"After the victory of the Islamic Revolution, Iran severed its diplomatic ties with the Apartheid regime, but since the victory of the South African people, Tehran has established the best relationship with Pretoria," the Iranian foreign minister added.

The aim of the visit by Zarif and his accompanying delegation to Pretoria is to hold talks on bilateral relations and the 2015 Iran nuclear deal.

South Africa is the second big economy of the African continent which has taken positive steps towards promoting relations with Iran following the conclusion of Iran's nuclear deal with the six world powers.