Iranian President Rouhani said at the meeting of high-ranking delegations of Iran and Switzerland that European countries should denounce US unilateral behavior in the world.
News ID: 71060 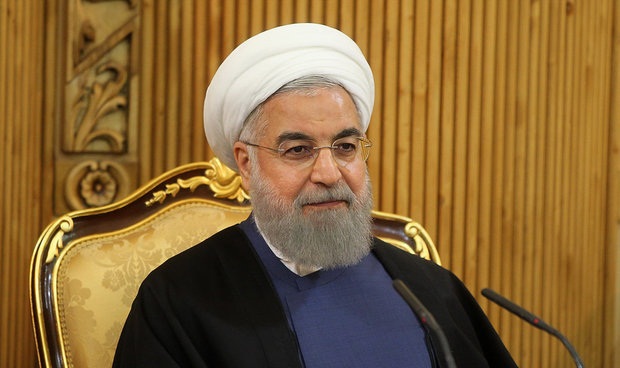 TEHRAN (Defapress) –Iranian President Hassan Rouhani and President Alain Berset of the Swiss Confederation jointly chaired the meeting of high-ranking delegations of Iran and Switzerland and referred to historical ties between the two countries as being based on friendship, mutual interest and promoting international peace and cooperation.

Speaking at the meeting that was held on Tuesday in Bern, President Rouhani referred to the Swiss president's last visit to Tehran as a very successful trip, saying “there is a long history of relations between the two countries which has secured bilateral interests and helped promote international peace and cooperation.”

“The Joint Comprehensive Plan of Action (JCPOA) was a good opening in further development of relations between Iran and other friendly countries. This agreement is very important for increasing regional and global trust, security and development and Iran has been fully committed to all its obligations since the beginning,” added Mr. Rouhani.

“All European countries are supposed to explicitly and openly support multilateralism in the world and condemn current American policy of unilateralism to underline the path of honoring international agreements and commitments,” said the Iranian top executive.

He went on to mention the long negotiations that led to the JCPOA and said “the world public opinion became happy about this agreement and endorsed it, therefore, it is expected that all countries of the world work hard to maintain it.”

“Today, one of the parties has not only withdrawn from the deal in an illegal move, but is also threatening other parties not to be committed to their obligations,” he added.

Rouhani also said, “the Islamic Republic of Iran is determined to develop its friendly relations with the world, the European Union and especially Switzerland and we expect that Bern and all other European countries explicitly denounce the current policy of the US government in unilateralism."

Mr. Rouhani also referred to the signing of agreements between the two countries and the economic meeting as a very important indication of Tehran and Bern's resolve to develop relations, saying “there are ample opportunities for development of economic cooperation and investment of Swiss companies in Iran.”

The two countries are fully determined to develop economic cooperation with each other, said the President adding “to resolve issues on the path of development of relations, formation of a join commission for following these relations is imperative.”

He also said that the United States is the biggest violator of human rights in the world today, continuing “we are willing to discuss and share our experience in human rights issues. Sanctions against Iran is a blind, anti-human rights move, because it's targeted medicine, food and people's lives.”

“Applying limitations on Muslims for visiting the United States is another action that is considered a major violation of human rights,” added the Iranian president.

At the same meeting, President Alain Berset of the Swiss Confederation said, “any understanding of Iran without paying attention to its civilization and culture is incorrect.”

“We are proud of our good relations with Iran,” said Berset, adding “signing of road map for development of relations between the two countries has contributed to the trend of deepening of relations.”

He also said “we support the JCPOA and consider it an unprecedented victory for global diplomacy. Switzerland believes in international laws and multilateralism, as well as stable behavior in the international stage and therefore, is deeply concerned about the United States' unilateral withdrawal from the deal and has announced it."

“The Swiss government considers itself committed to continuation of the JCPOA and emphasizes that its views towards the deal has not changed,” he added.

He continued “US withdrawal from the deal is not the end of this agreement, and today, the other parties to the agreement must decide on supporting it. Switzerland appreciates Iran's logical and moderate behavior in the face of US withdrawal.”

US pullout has no effect on the cooperation of Swiss state and private sectors with Iran, he said, “Switzerland has a long tradition of dialogue, mediation and respecting international law and multilateralism.”

“The message that comes from various meetings and talks between the authorities of Iran and Switzerland today, as well as the presence of 40 major Swiss companies at the joint meeting with Iranian businessmen, is proof of Switzerland's will to continue economic relations with Iran.”