Head of the Islamic Revolution Guards Corps Public Relations Department General Ramezan Sharif underlined that the IRGC's Navy Force has made no changes to its routine patrols in the Persian Gulf region.
News ID: 71215 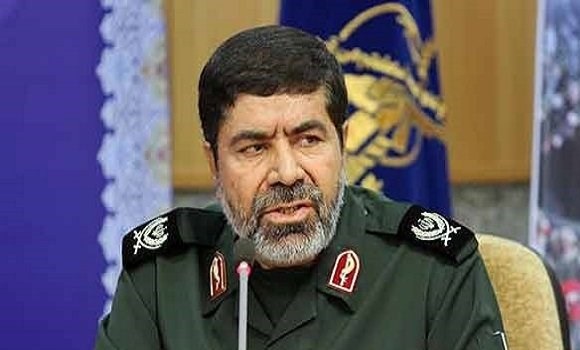 TEHRAN (Defapress)- "Confrontation with the US warships occurred time and again, the last instance of which ended up with the arrest of American marines and their subsequent apologies; after that incident, we witnessed a more lawful behavior from the Americans in the Persian Gulf and Strait of Hormuz regions, hence if the number of confrontations has reduced, it is because the US has learned its lessons,” General Sharif said.

General Sharif's remarks came in reaction to US President Donald Trump’s tweeted message on zero confrontation between the Iranian Navy and the US warships.

General Sharif reiterated that otherwise there have been no particular changes in the IRGC Navy’s routine patrols.

On July 8, President Trump tweeted US Navy statistics reporting "zero harassment of US ships by the Iranian Navy in 2018", which stood in contrast with 36 such occurrences in 2016.

While it appeared that Trump was trying to imply that his intimidation tactics had something to do with the lack of confrontation between the Iranian and American navies during his term in office, Iran maintained that the case was because of US’ own decision to cut down its illegal trespassing into the Persian Gulf waters.

"If we want to avoid lagging behind the world's state-of-the-art technology, we need to stop applying old methods; today 'Eshraf (Intelligence Superiority) Plan' can be effective as a precise and complete scenario against any regional and trans-regional threat as it can enable us to realize at what point we are standing and which measures we should take for our combat preparedness and capabilities and to take the best decision under the hardest conditions," Rear Admiral Khanzadi said, addressing a Navy festival in Tehran.

Eshraf Plan focuses on further reinforcement and equipment of the Iranian Navy with the most modern technologies to have intelligence superiority over the Sea of Oman and the international waters away from the country's territorial waters in the Persian Gulf.

The Iranian Navy has been conducting anti-piracy patrols in the Gulf of Aden since November 2008, when Somali raiders hijacked the Iranian-chartered cargo ship, MV Delight, off the coast of Yemen.

The 53rd fleet of warships of the Iranian Navy returned to Bandar Abbas in Southern Iran earlier this month after completing 30 days of sea navigation in free waters.

The Iranian Navy’s 53rd flotilla of warships, comprised of Alvand and Bushehr destroyers, was welcomed by Commander of the Southern Fleet's Moqaddam base Admiral Afshin Tashak in a ceremony in Bandar Abbas.

The 53rd flotilla of the Navy returned to the country after 30 days of sailing and fulfilling missions in the international waters.

The 54th fleet of the Iranian warships, consisting of the strategic Khark warship and Sabalan destroyer, was sent to the high seas weeks ago to replace the 53rd flotilla.

According to UN Security Council resolutions, different countries can send their warships to the Gulf of Aden and coastal waters of Somalia against the pirates and even with prior notice to Somali government enter the territorial waters of that country in pursuit of Somali sea pirates.

The Gulf of Aden – which links the Indian Ocean with the Suez Canal and the Mediterranean Sea – is an important energy corridor, particularly because Persian Gulf oil is shipped to the West via the Suez Canal.