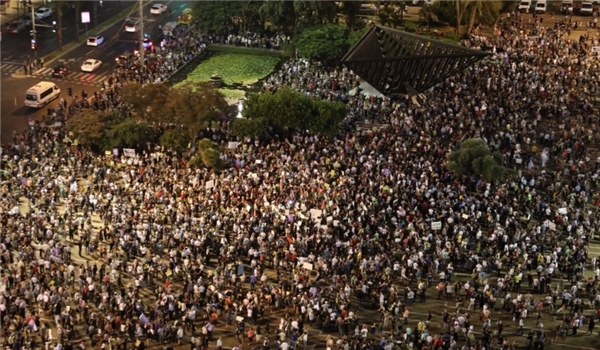 TEHARN (Defapress)The High Follow-Up Committee for Arab Citizens, which represents Palestinians living in Israel, called for the march in response to the approval of the law by the Israeli parliament (Knesset) last month.

“Yes for equality” and “No for the [Jewish] National law” were among the slogans read on banners waved by protesters who also raised the Palestinian flags.

"The basis of the demonstration today is to direct a powerful message that the national law will be abolished,” Ghanaim told the protesters, adding that "this law which establishes an apartheid regime in Israel will be abolished and we will prevail".

Barakeh praised the march, saying that "all Arabs and Jews are attending the march in thousands in order to repeal this abomination of a law and remove the stain left by the [Israeli Prime Minister Benjamin] Netanyahu’s government".

The law defines Israel as a Jewish state with a "united Jerusalem" as its capital. It has also promoted Hebrew as the only official language, stripping Arabic as an official language while recognizing its “special status”.

The new legislation risks further alienating the Arab minority who argue they already face discrimination from Israeli Jews and the government and already feel as though they are second-class citizens.
Palestinians, who have Israeli citizenship make up 21 percent of the population, are known as Israeli Arabs and have members in the Israeli parliament, the Knesset.