Chief of Staff of the Iranian Armed Forces Major General Mohammad Hossein Baqeri warned “hostile countries” that they would face the Islamic Revolution Guards Corps Navy’s reaction in case of any violation of the international maritime law in the Strait of Hormuz.
News ID: 72084 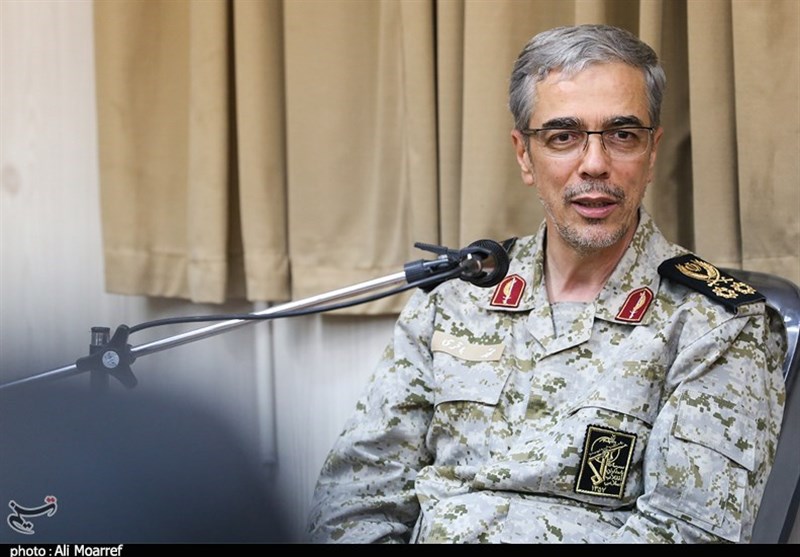 TEHRAN (Defapress) – “Thanks to the IRGC Navy’s preparedness and capabilities, the hostile countries are anxious before entering the Strait of Hormuz, as they have obeyed the international (maritime) law over the past year, and if they go beyond the law, they will face the IRGC Navy’s counteraction and controlling measures,” Major General Baqeri said in a meeting of top IRGC Navy commanders in Iran’s northeastern city of Mashhad on Wednesday.

Describing the Persian Gulf as Iran’s home and the enemies as uninvited guests, the top general highlighted Iran’s preparedness to counter the adversaries, adding that the Iranian Armed Forces never underestimate the enemy’s threats.

Stressing the need for enhancing the capabilities and deterrent power of the Iranian forces, the commander said the enemies are aware of the IRGC Navy’s combat preparedness and know that “in case of any clash breaking out, they would confront a successful, up-to-date, efficient and strong Navy.”

“The enemies should realize that the Persian Gulf is not a proper place for war and clashes,” , he said, adding that “whenever an idiot in the US orders war, even their (American) experts announce that they (the US) are not capable of confronting the Islamic Republic of Iran.”

His comments came after US Secretary of State Mike Pompeo dismissed the comments by new commander of the IRGC Navy who had highlighted Iran’s full control of the Persian Gulf.

Speaking to reporters on Monday, Rear Admiral Ali Reza Tangsiri said Iranian forces are vigilantly controlling the country’s southern waters in the Persian Gulf and the Sea of Oman.

In remarks in 2016, Ayatollah Khamenei underlined that security of the Persian Gulf region comes within the purview of the regional countries alone, and dismissed the US claim of seeking security in the region.

Ayatollah Khamenei has also called for the enhancement of the Iranian naval forces’ presence in international waters and expanding the Navy’s power in balance with the merit of the Islamic Establishment.