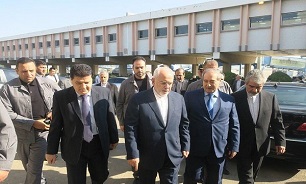 Upon arrival in Damascus airport, Mohammad Javad Zarif told reporters “after the victories of the Resistance Front against extremist groups and terrorism in Syria, the time has come for rebuilding of the country, and the Syrian strategic allies will take part in Syria's reconstruction process.”

Iranian foreign minister pointed to a trilateral summit between the presidents of Iran, Turkey and Russia which is slated to be held on September 7 in Tehran, saying “ways to confront extremist and terrorist groups, including the Tahrir al-Sham (Jabhat al-Nusra) will be discussed in the meeting.”

Zarif also said that cooperation on the political process and the fight against the terrorists in Syria will continue.

He further said that humanitarian aid and refugees' return to their country has begun and neighboring countries have an important role to play in that regard.

The Iranian diplomatic chief was welcomed by Syrian Deputy Foreign Minister Faisal Mekdad at the airport upon his arrival at Damascus airport.