TEHRAN (defapress) – Iran’s Ambassador to the UN Gholamali Khoshroo said the growing trend of unilateralism, interventionist policies and imposition of politically-motivated sanctions is a threat against promotion of global peace and security.
News ID: 72217 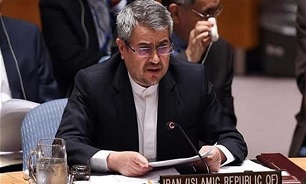 He made the remarks in his address to the 72nd session of the UN General Assembly on Wednesday, which was dedicated to a high-level forum on a culture of peace.

He maintained that interventionist policies, military aggression against independent states, the strengthening of terrorism and violence in the world, and especially in the Middle East, are the consequences of US unilateral, interventionist and narrow-minded policies.

He then highlighted the need for an immediate response to some serious challenges such as the formation of Al-Qaeda, the military attack on Iraq and Afghanistan, the regional agents’ support to takfiri-terrorist groups, and the desperate attempts to legitimize the occupation of Palestinian territories.

In response to Saudi Arabia’s envoy who accused Iran of sponsoring terrorism, Khoshroo said Saudi Arabia has given military and arms support to al-Nusra Front, ISIL, and other extremist and takfiri terrorist groups, and in parallel of that measure, the Arab Kingdom is continuing to bomb innocent children in Yemen.

“Such measures are destructive to peace and stability in the Middle East, and are in line with serving the US regional goals,” Khoshroo stressed.

He further called the US withdrawal from UNECO, UN Human Rights Council, Paris agreement and the 2015 Iran nuclear deal, as examples of self-serving and arrogant polices that have stemmed from an extreme case of unilateralism.

He added that such an approach has no effect on independent countries which seek to make their own decisions based on national interests.