TEHRAN (defapress) – Syrian President Bashar al-Assad held the Tel Aviv regime responsible for the deaths of over a dozen Russian servicemen aboard an Il-20 surveillance aircraft, which was accidentally shot down by Syrian air defenses while they were responding to a wave of Israeli air raids.
News ID: 72543 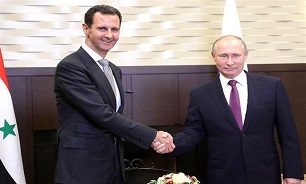 In a Wednesday letter to his Russian counterpart Vladimir Putin, Assad said the “unfortunate incident” was a result of “Israeli arrogance and depravity,” adding that the Tel Aviv regime always resorts to the “dirtiest means to achieve its goals.”

The Syrian leader also offered his nation’s “deep condolences” on the “martyrdom of the Russian heroes who were doing their noble duties along with their colleagues of the Russian military forces in the fight against terrorism in Syria.”

Assad expressed confidence that such incidents would not affect joint Moscow-Damascus fight against terrorism, according to the official news agency SANA.

“We are determined that such tragic events will sway neither you nor us from continuing the fight against terrorism,” Assad wrote.

Russia’s Defense Ministry held Israel responsible for the incident, saying the regime’s warplanes “created a dangerous situation” that led to the downing of the Russian aircraft by Syria’s S-200 missile defense system.

Israel’s Ambassador to Moscow was also summoned to the Russian Foreign Ministry.

Russian President Vladimir Putin also slammed the regime’s aerial operations against Syria as a violation of the Arab country’s sovereignty, saying, “Russian-Israeli agreements on the prevention of dangerous incidents were not observed” in this case.

Tel Aviv does not usually acknowledge the strikes it conducts in support of the terrorists operating in Syria, but the downing of the Russian plane drew a rare admission from the regime.

Israeli Prime Minister Benjamin Netanyahu also expressed regret over the deaths, and “offered to send the Israeli Air Force commander to Moscow to deliver all the necessary details” for the investigation, a statement by his office said.

A delegation led by Amikam Norkin, the regime’s air force commander, will travel to Moscow on Thursday with information about the crash.